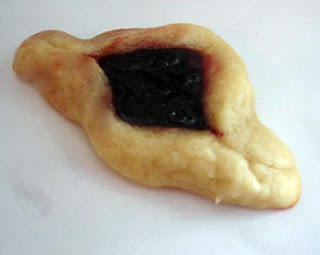 Place all of the ingredients in a large bowl and mix until well combined and a thick batter forms, about 10 minutes. If the batter looks too wet, add a little flour or if it looks a little dry and isn’t coming together, add a tablespoon or so of water. Refrigerate the dough (still in the bowl, no need to wrap it or anything) about 15 minutes. Meanwhile, preheat the oven to 350 and line three cookie sheets with parchment paper*. Roll about 2 tablespoons of dough between your hands to form a ball. Place on the lined cookie sheet and press to make a 1/4 inch thick circle, about 2 inches around. Place a scant teaspoon of jam in the center and pinch the edges of the cookies to make 3 corners, but don’t seal dough up completely, you want to see the jam in the middle. If the jam looks like it is going to pop out, scoop a little out. Repeat until the dough is gone, placing each cookie about 1/2 inch from each other. Take a break and refrigerate the dough if it gets too soft to handle. Bake exactly 12 minutes. The cookies will be soft when they come out of the oven, but lightly brown on the bottom. Carefully lift the parchment paper with the cookies still on top and place the whole thing on a cooling rack. Allow to cool on the parchment paper until they are firm to the touch, about 10 minutes. Allow to continue to cool on a wire rack. Serve at room temperature.

*You really, really need to line the cookie sheet with parchment paper. Do not try and grease the pan instead, the cookies come out of the oven still very soft. Allowing them to cool while still on the parchment on the rack allows them to set while minimizing casualties.

At the risk of becoming known as the Queen of Hamantaschen (although, on second thought, that is not too bad) here is another hamantaschen recipe. We’re going to dinner tonight at our friends’ house and offered to bring dessert. It was suggested that I made hamantaschen since this weekend is Purim and supposedly, I am now a hamantaschen expert. One of our friends is vegan, so I went to work looking for an existing vegan hamantaschen recipe and couldn’t really find many. There were a few, but most called for margarine or soy milk, which we don’t use, so I came up with this one so I didn’t have to buy any special ingredients. The resulting cookie turned out better than I expected, considering that while I make a fair amount of vegan foods, I very rarely have made vegan cookies and was making it up as I went along. They turned out very tasty and the cookie part was almost buttery tasting. The dough supported the jam filling very well and was pretty easy to work with. I don’t think anyone would guess they were vegan unless you told them (if you are worried about that sort of thing) they are that close to nonvegan versions I’ve had. They were actually a little easier to make than regular hamantaschen because you skip the rolling the dough/cutting step and just shape them with your hands. I intentionally left out any sort of leavening agent (i.e. baking soda or baking powder) because I didn’t want them puff up too much and cause the jam to spill out but don’t worry, it is not a dense or hard cookie. In the interest of full disclosure, some cookies did came out sort of misshapen, but I think that says more about my pinching skills and lack of patience than the dough, which held its shape remarkably well and did not spread.