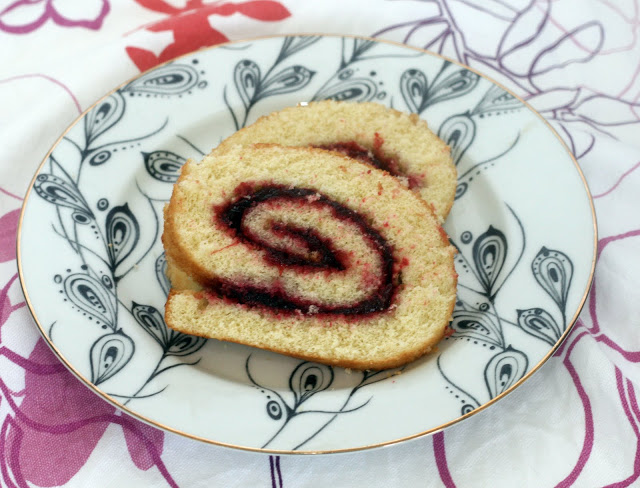 Directions:
Preheat oven to 375. Grease a jelly roll pan. Line with parchment paper, grease again. Whisk together the dry ingredients in a medium bowl. Set aside. In a separate bowl, whisk the yolks together until yellow and creamy. Add 1/2 cup sugar in a steady stream and beat until well mixed. Stir in the vanilla and vanilla bean. Slowly stream in the flour until incorporated.

Pour the batter into the prepared pan. Bake for 12-15 minutes or until golden and spongy to the touch. Turn the cake over on to a towel. Peel off the parchment paper, and then roll the cake and towel together tightly, starting with the narrow end. Allow to cool. Unroll and spread with jam. Re-roll and slice.

Let me see that jelly roll! My husband’s birthday was this past weekend and he decided he wanted a jelly roll. Thank goodness because I have enough jam and jelly to feed a nation. I had never made a jelly roll before but I had the pan and there is no harm in trying, right? My mom said that her grandmom used to make jelly rolls so I guess I am carrying on the family tradition. If only they had left behind a recipe! I had to wing it. Jelly rolls (swiss rolls) are basically sponge cakes all rolled up around some sort of filling. Jam is the simplest, I think, and perhaps the tastiest. Especially if you are using homemade jam!