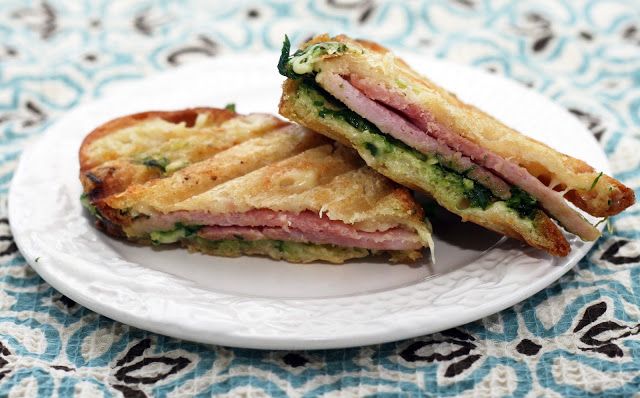 Directions:
Place the pesto ingredients in a food processor or blender. Pulse until well ground.
Place the cheese in a single layer on a slice of bread. Spread the ramp pesto on the cheese, top with ham and another layer of cheese. Cover the cheese with the other slice of bread. Lightly oil each side of the sandwich. Place on a panini press preheated to “medium”. Press until the cheese is melted and the bread is toasted.

Recently I was sent some yummy cheese from Emmi. I loved the Swiss Alp Bellevue and Winzer Classic so much but I thought the  Gruyère would work well with the leftover ham I had. I also had some ramps leftover from some other dishes (recipes to come!) that were looking a bit limp so I thought I’d make a quick pesto with it. The sandwich ended up being a West Virginia meets Switzerland meets French sort of an affair which sounds crazy but was really, really good! I like making panini because some how they seem more special and oddly, more filling than regular sandwiches but I think this one would be good cold as well.

Like ramps?  One of my recipes (with picture!) is included in this cookbook, Ramps: Cooking with the Best Kept Secret of the Appalachian Trail available now!