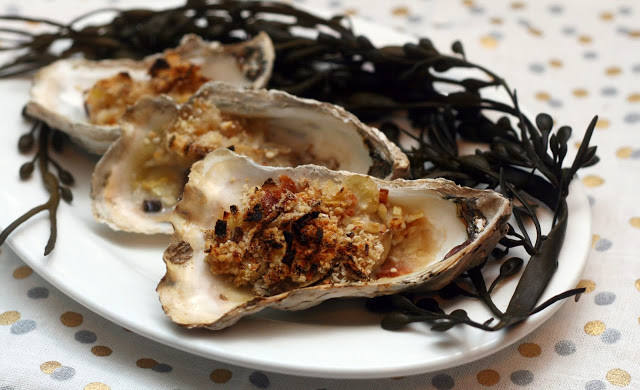 Directions:
Saute the leeks and garlic in 1 1/2 tablespoons bacon grease until soft. Remove from heat. Add the bread crumbs and bacon bits and stir to combine. Shuck the oysters. Discard top shell.

Place oysters in their shells on large baking sheet or broiling pan.

Sprinkle breadcrumb mixture over each oyster. 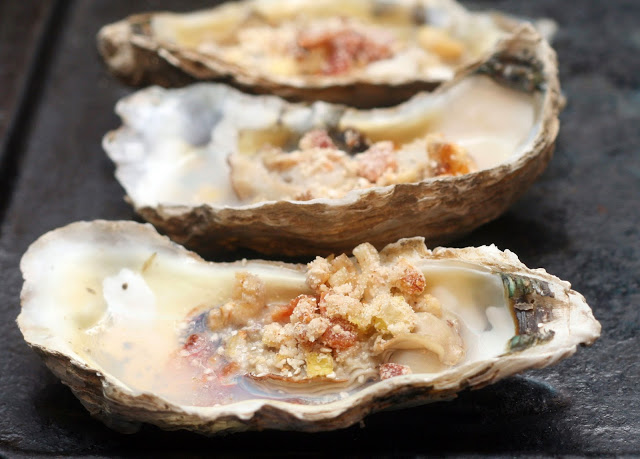 Broil until crumbs are golden, about 3 minutes.

Oysters are my favorite food if I have to pick just one. Maybe it is growing up in Baltimore but add oysters to anything and I am in! Oyster stew, po’boys, oyster casserole, scalloped oysters, oyster stuffing, oyster Eggs Benedict, whatever! I even put a Buffalo fried oyster on the half shell recipe in my new cookbook. So when I could add two dozen oysters from Barren Island Oysters to my produce delivery one week, I had to do it! We hadn’t shucked oysters at home before and it was a little tricky because the oysters’ shells were so irregularly shaped but we got the hang of it. If you don’t have an oyster knife, you can place them in a 350 oven for about 3-5 minutes or until they start to open. Then you can pry the shells off pretty easily. Since I had the oysters in the half shell, I came up with a savory, bacon-y stuffing for them. It was so good; not overpowering of the oysters at all but a fun, flavorful change from just having raw oysters. Serve as a meal or as an appetizer. The recipe can be easily doubled.