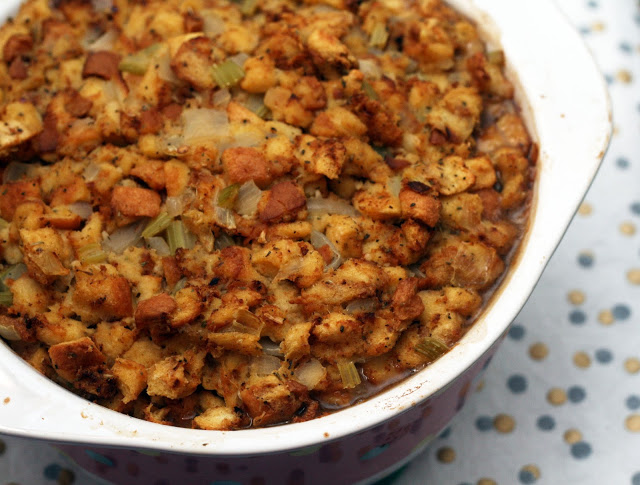 for the stuffing layer:
Heat the butter and oil in a skillet. Saute the onion, garlic and celery over very low heat until the onion is translucent and the celery is soft but neither is browned. Toss with the bread cubes,egg and spices. Pour the stock over the mixture and mix until well distributed. Set aside.

Meanwhile, saute the potato, carrot, garlic, shallot and celery and saute in a large skillet until the vegetables are softened. Stir in the turkey and gravy, cook until warmed through 2-5 minutes. Spoon into a 2 1/2 quart baking dish. Top with stuffing. 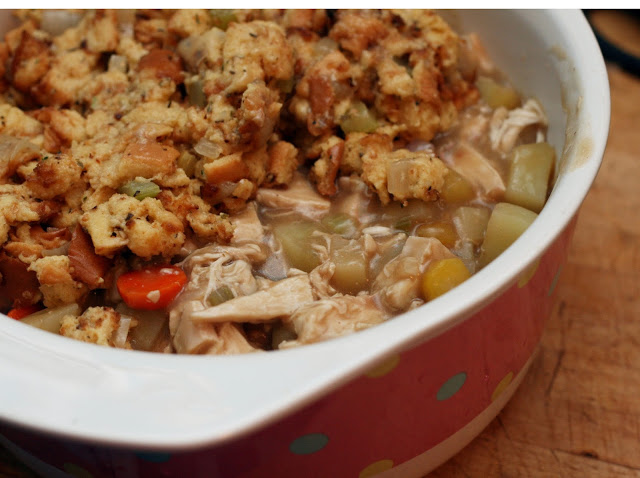 Bake covered for 15 minutes then uncovered for an additional 15 or until hot and the stuffing is browned.

I was trying to think of a theme for Thanksgiving posts this year and was having trouble. This is my eleventh Thanksgiving since starting this blog and I’ve done everything from pomegranate-themed to Hawaiian (complete with Pineapple-infused Turkey and Spam-Hawaiian Bread Stuffing) to Polish (with kielbasa-rye stuffing) to Thanksgivukkah and a ton in between. This year I’ve declared it to be the  #seasonofpie and am making all of my favorite Thanksgiving dishes in pie form. First up: Turkey and Stuffing Pie. All of the taste of turkey and stuffing with a fraction of the work. Think of it as a turkey pot pie with stuffing as the crust. Homey and satisfying. Perfect for small (or potluck!) Thanksgivings or even using up leftovers after the big day.