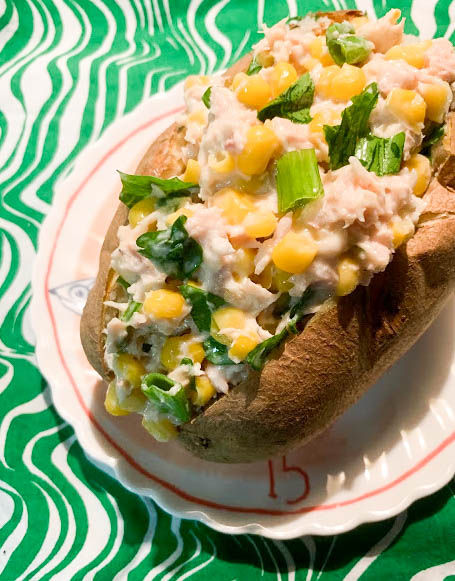 Preheat oven to 400. Scrub off the potatoes and score an X in the top of each. Roast for at least 1 hour.

Slice the potatoes in half length-wise and fluff the potato with a fork. Top with tuna mixture, serve.

*I don’t know if I have ever brought canned corn kernels before but the Green Giant Steam Crisp corn was really good! Minimal water in the can and it was actually really crisp. Much crisper than frozen corn.

Tuna and sweetcorn is not a popular combination here in the US. I had heard of it before our trip to England a few years ago but I was still surprised to see tuna and sweetcorn in such abundance. It was in grocery stores among the other prepared sandwich selections (why is Europe so ahead of us in the packaged sandwich game?), I saw it on menus at cafes, and I even saw an ad for tuna and sweetcorn pizza! When we made our way up to Bath, it had been a long day and we ended up getting some take out from a little place (The Bridge Coffee Shop if I remember correctly) right on the Pulteney Bridge over the Avon River. I had sort of wanted to try a tuna sweetcorn sandwich on the trip so I was a little disappointed that I didn’t see it on the menu but they did have it as a topping for a jacket (or baked) potato. Yes, please! The combination was oddly tasty! The creamy tuna plus the lightly sweet corn really did work. It was a fun contrast to the hot potato beneath.

I’d love to know the origins of this combination. I really can’t find one. Canned tuna was introduced around 1908 but really didn’t become popular until the 1920s. Tuna salad was a new addition to the repertoire of lunch salads like chicken, ham or egg that had their roots in saving scraps from dinner and turning them into new dishes. When canned tuna became available they pushed turning it into casseroles and mayonnaise-based salads. You no longer need to wait for leftovers to make tuna salad and it was an affordable source of protein. Perhaps the heightened popularity of canned corn after Green Giant invented a vacuum method of canning corn in the late 1920s and love of tuna salad hit at the same time in England and Ireland resulting in a sandwich filling that could be tossed together quickly with pantry ingredients. I really don’t know.

I had thought of tuna and sweetcorn off and on from our trip but never bothered to make it. Anyway, the other day I unexpectedly needed to make dinner, had tuna and potatoes I wanted to use up so my husband picked up some canned corn and here we are. Normally, the combo is literally mayonnaise, tuna and drained canned corn but the potato I had a garnish of green onion that I thought really pepped up the dish so when I made it, I added in some green onion and parsley. That and some lemon pepper (or fresh lemon zest, salt, and pepper if you’re fancy) added a fresher, brighter taste to the final dish. Try it, it’s oddly satisfying!