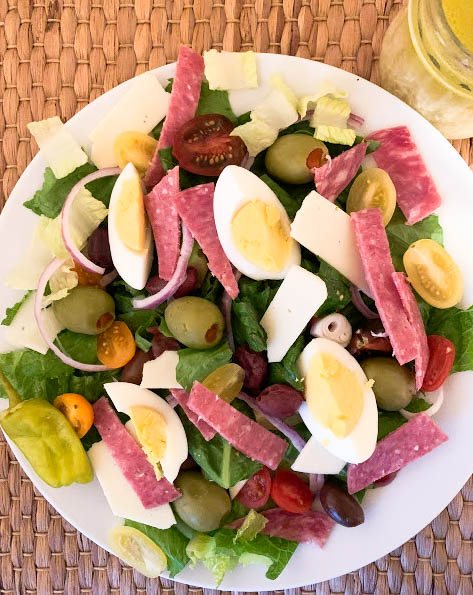 In a jar with a tightly fitted lid, shake together the salad dressing ingredients to mix thoroughly. Set aside.

For the salads: Evely divide the romaine among 4 plates, top with an assortment of the remaining ingredients.  Serve the dressing on the side so everyone can dress their own salad.

This is my homemade version of possibly the most famous salad in Baltimore. It is from an old school Italian restaurant here called Sabatino’s in Baltimore’s historic Little Italy neighborhood. Going there is like taking a trip back in time and the menu is full of classic Italian-American dishes like lasagna and manicotti. However if you mention Sabatino’s to a native Baltimorean, the first thing out of their mouth is either a mention of the bookmaker salad or the Sabatino’s signature salad dressing. You can upgrade your side salad to be a bookmaker salad or get the signature dressing. It’s serious business there! It’s basically a chef’s salad but with Italian meat or cheese or what I’ve seen called an antipasto salad. What sets it apart is the thick, parmesan-loaded vinegarette they serve on it. People love this salad!
It’s been one of my most requested recipes for years but I’ve never made it. I’m really not much of a green salad person. This year, following our New Year’s Eve (and Day!) tradition of themed movies, games and food I finally made it. Our theme this year was “games” and while I had some duck (game meat), chess pie and Cornish Game Hens on the menu, we were really lacking on vegetables. Then inspiration struck and I remembered the bookmaker salad. Bookmakers (aka bookies) place bets on games! It was good enough for me. It has been years since I’ve had this salad at Sabatino’s (I went there after my college graduation and then just a few times after that) judging from the pictures I found in reviews online nothing’s changed. I wouldn’t expect it to! I think you could time travel from 1961, go to Sabatino’s and have it be unchanged. You get the salad as a meal with shrimp on it which sounds good but honestly, it’s pretty filling without it! When I went there, it was popular to get a half salad as your vegetable (without the shrimp) with a heartier entree.
The original just has Genoa salami and domestic provolone and that’s fine but we have a great Italian grocery in our neighborhood* so I upgraded the salad to a mix of Genoa salami, aged, imported provolone and a personal favorite of mine, sweet (as in not hot, not sweet-sweet) soppressata which, while also a salami, has a different flavor profile than the Genoa and added a ton of depth to the salad. When there are these few ingredients, every single one counts. I also went for the pricier imported white wine vinegar and olive oil and of course excellent quality parmesan.
I will say that the dressing is a tiny bit “gritty” or chunky thanks to the copious amounts of grated cheese in it, which according to some reviews I saw online people don’t always love, but it is very tasty, I assure you! It’s no grittier than it would be if you had sprinkled parm on your pizza (or salad!)  but I think people are used to creamy parmesan dressings from the supermarket so it stands out. It’s served on the side at Sabatino’s so you can dress your salad yourself and I found that worked well at home too. It’s an assertive dressing! It really accents the flavorful meats and brings the whole salad together.

To drive home this salad’s popularity, when the maitre d’ who invented the salad, and named it after his gambling friends, died, the salad made it into his obituary.  He led quite a colorful life! He says he created a salad as a “lighter” option for his old bookmaker friends to entice them into coming to dinner at Sabatino’s.

*I also saw a pack of Italian meats at Aldi (and Trader Joe’s) that had Genoa salami and sweet soppressata in it for about $4-6 if you don’t have an Italian deli locally.