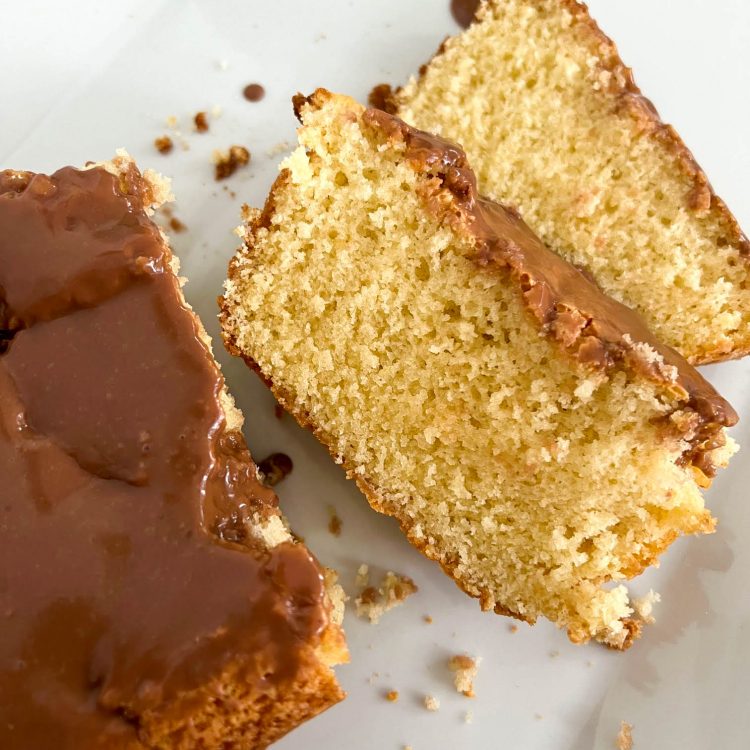 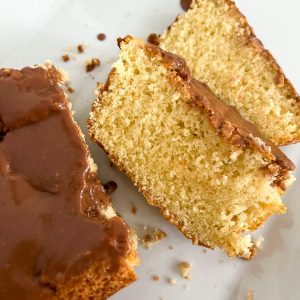 I honestly thought I had posted my family’s recipe for hot milk cake like 17 years ago when the blog was just a baby but I can’t find it so I guess I didn’t! I actually don’t ever remember making the cake myself so I guess that tracks. I do normally remember everything I made and posted here. I’m sometimes surprised at how long ago I made something but between recipe creation, writing it up, and photographing it, it is pretty well stuck in there. March is my mom’s birth month so it seems fitting to finally post it now. It is a great cake for Easter, it does somehow seem springy!

Hot milk cake was a favorite of my great aunt Evelyn (my grandpop’s older sister). My mom was raised by a single dad after her mother died in childbirth in her mid-forties so she was helped raised by her grandparents (born in 1886 and 1891!) and her aunt who she called Aunt A because she couldn’t pronounce Evelyn. My mom had me at the relatively young age of 22 and I was lucky enough to have a lot of time with her Aunt A and my grandpop. Hot milk cake was just what we always had at birthdays and Easter. I didn’t think much of it growing up. I vaguely feel like I had the impression as a child that it was an old-fashioned cake because whenever my mom would make it she would always say “your Aunt A always liked this cake” and both my Aunt A and Grandpop were old when I was born.

Aunt A and Grandpop grew up in the neighborhood of Baltimore called Pigtown back when it was still earning its nickname–it was near the B & O Railroad hub (where their father worked) and slaughterhouses so they would unload the pigs from the train and run them down the streets to the processing plant. That must have been quite a sight! My Aunt was seen as a little “fragile” and was in what they called the “fresh air club” where instead of having a class with her peers she was in a special group that would have more general lessons on the roof of the school because they felt the fresh air and sunshine might help her. It may well have, she lived until she was nearly 80. I heard so many stories about growing up in Baltimore back then that I think of often.

My grandfather and great aunt were a lot older than my peers’ grandparents and their stories of remembering the soldiers coming home from WW1 and parading through the streets of Baltimore, surviving the Flu of 1918  and then the depression really added to my impression that the food they made was just what older people ate. It wasn’t until later that I realized that some of it like eating Manning’s hominy with sausages and making this cake isn’t old-fashioned (although it is, a bit), it was regional. Manning’s was an early canned hominy brand from Baltimore that they probably ate prior to its mass production. Hot milk cake seems to be a mid-Atlantic creation. I cannot get any firm idea of exactly when it started or where. Wikipedia dates it back to 1911 which tracks for me and then other mentions have people reminiscing about their parents making it in the 1940s. Other sources claim it was popularized by Betty Crocker while other recipes say it hit its peak during the Depression which to me makes the least amount of sense since it uses a lot of milk, eggs, and butter. But they all say it is especially popular in the mid-Atlantic and nearly very narrative mention I find involves a relative in Baltimore or Maryland making the cake.

It is basically a simplified sponge cake. Rather than creaming the butter and sugar together, you beat whole eggs and sugar until they are frothy and then fold in a mixture of cooled scalded milk and butter. Scalding the milk (heating it to just below boiling and then removing it from heat) denatures the whey proteins which can yield a lighter, fluffier finished product.

When I moved out of the family home years ago (going from the west side to the east side of Baltimore!) my mom handwrote down a bunch of her recipes on index cards and gave them to me in boxes along with random notes she hid in there. Very sweet and very handy since unlike the rest of her very long-lived family, she died a little over a year ago in her early sixties. The last line in her recipe is Enjoy! and I really think you will enjoy this cake. It’s light and fluffy but still has a unique flavor and texture all its own.

Traditionally we would make this as a layer cake and ice it with the frosting of the birthday boy or girl’s choosing but as you’ll find, it forms sort of a crisp yet almost chewy sugary crust to it that I always loved so I baked it into a loaf cake and six cupcakes instead and did a simple glaze: 1 1/2 tablespoons whole milk, 1/2 teaspoon vanilla, 1 cup confectioners sugar and 1-2 teaspoons cocoa all whisked together and poured over the cooled cake. Please do that step on a platter and not on the rack. I always forget that and have regrets.’

Strangely Epicurious posted a piece on hot milk cake today as well. This is not the first time I’ve been talking about something and suddenly it appears elsewhere online. It even mentions mayonnaise cake which I also recently wrote about.