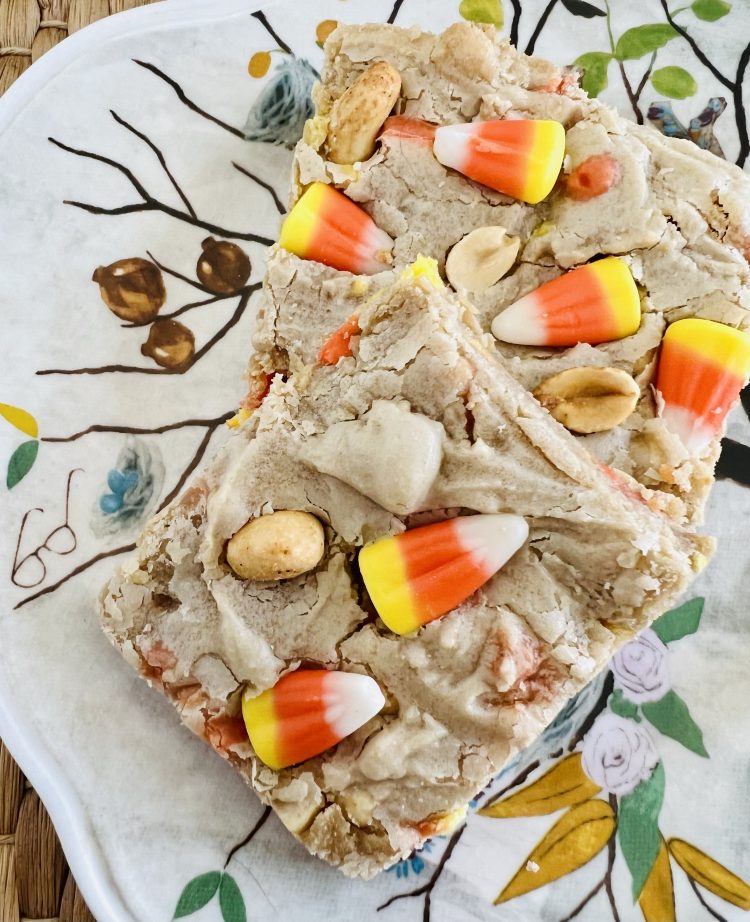 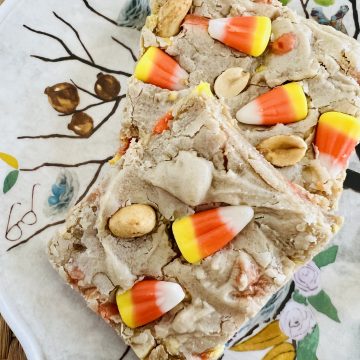 I used vanilla flavored candy corn but I am sure the regular old Brach’s would work just fine. The texture was basically the same.
Keyword bars

Years ago someone mentioned that their favorite fall snack with candy corn with peanuts. It was such a genius combo I felt a little strange that I didn’t think if it myself. Super sweet plus salty peanut? Yes, please. The combination of marshmallow and peanut is classic for a reason and I have always thought of candy corn as a marshmallow cousin.

I really had a craving for this last month but could not find candy corn when I was shopping for our vacation snacks. I had bought (and finished) a bag in what I swwar was late August but suddenly it was no where to be found. While on vacation in Cape May, NJ, my husband went to pick us up sandwiches at a deli that had bulk candy and brought us back a tub of candy corn and a tub of candy corn gummies. I was excited until I bit into and realized it wasn’t candy corn flavored, it was vanilla! The tub was only around $2.30 but clearly it was gourmet candy corn. We all know the honey-ish flavor of Brach’s is what we mean when we say candy corn! It was good but not what I had my mouth set for.

My husband offered to toss it (It’s only candy corn! It was $2.30!) but cheap as I am I couldn’t do it. There was nothing wrong with the candy corn, it just wasn’t what I was expecting.

So that’s the story of how I ended up making these blondies. I did use the fancy corn but I can only image regular candy corn would be fine. Harvest corn too if you like that. I’m a purist.

I’m not going to lie, these are sweet, gooey blondies. But the flavor is brightened and made every so slightly more savory and “adult” thanks to the peanuts. It took some tweaking but it really is a fun way to use up candy corn.