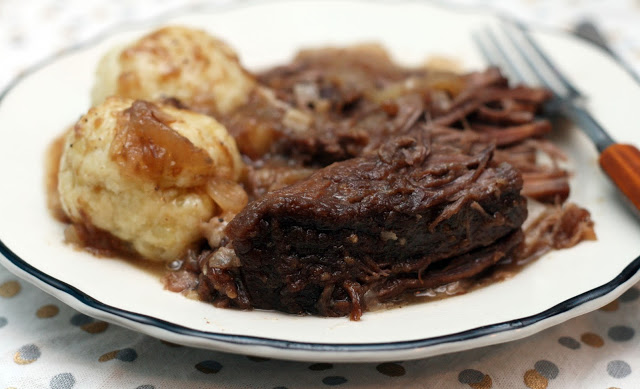 Place the rack in the Instant Pot. Add the potatoes and 1 1/2 cups water. Cover. Press the Steam button and adjust the time to 15 minutes. Quick release by turning the steam release handle manually to Venting. Remove and drain the potatoes. Mash thoroughly. Measure out 4 cups of mashed potatoes. Reserve any remaining mashed potatoes for another recipe. Set aside the potatoes to cool. Note: you can also make the potatoes the night before and refrigerate them until ready to make the dumplings.

Meanwhile, bring a large pot of water to a rolling boil. In a large bowl, use a potato masher to mash together the cooled mashed potatoes, baking powder, salt and the egg. Add the flour in 1/2 cup increments until the mixture resembles a dough and the mixture holds its shape. Form into 2 to 3 inch balls. They should be able to hold their shape but not be too floury or sticky. Drop them into the water. They should sink, then rise to the surface when cooked through, about 5 minutes. Place on a platter and cover in foil until ready to serve.

After the time is up on the Instant Pot, shred the meat a bit with a fork or break it into pieces if desired. Serve hot, with dumplings on the side.

*If not making homemade, I find that Stauffer’s Ginger Snaps make a good substitution.

Sour Beef and Dumplings is Baltimore’s answer to sauerbraten. Baltimore at one time had an enormous German immigrant population and a lot of influence can still be seen in our local dishes and traditions such as one of my favorite desserts, smearcase and serving sauerkraut at Thanksgiving. Part of what makes Sour Beef and Dumplings so unique is the addition of gingersnaps which add sweetness to counteract all that vinegar, spice and help thicken the sauce. Don’t be tempted to leave them out! They are what make the gravy and keep the dish from being just beef floating in vinegar.

I haven’t made sour beef since my Grandpop died but I’ve been thinking about it lately and since I’ve bought the Instant Pot, I thought I’d make an electric pressure cooker update to my perennially popular slow cooker Sour Beef recipe. I love that version but if I could make it quicker, why not? With Matt in school again, I end up making dinner at odd times so anything to streamline the process is very appealing to me! I made both the potatoes and the meat in the pressure cooker in just over an hour with very little hands on time. I did boil the dumplings on the stove top but that was easily accomplished while the meat was cooking. The result? Melt-in-your-mouth tender meat swimming in a tangy, spicy sauce. The perfect Baltimore sour beef. The dumplings were light and fluffy and helped cut the rich meat. My need to attend the German festival in search of the perfect sour beef is no more! I can now make it in just about an hour at home.

Note: I made this in an Instant Pot, if using another electric pressure cooker, check the manual for setting information. Cooking in a stove top pressure cooker is slightly quicker than the Instant Pot so you may need to adjust the time, it takes roughly the same time as a pot roast.