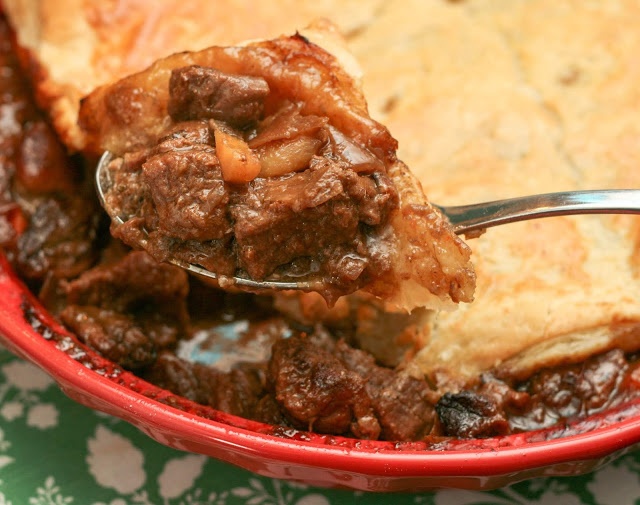 Toss the meat in the flour. Add to the pan and saute to lightly brown on each side. Add the spices, thyme, and stock (the stock should totally or nearly completely cover the mixture). Bring to a boil. Reduce and simmer about 40 minutes (I defrosted my puff pastry at this point) or until the liquid has reduced, the meat is tender and it looks like a thick stew. Stir in the oysters. 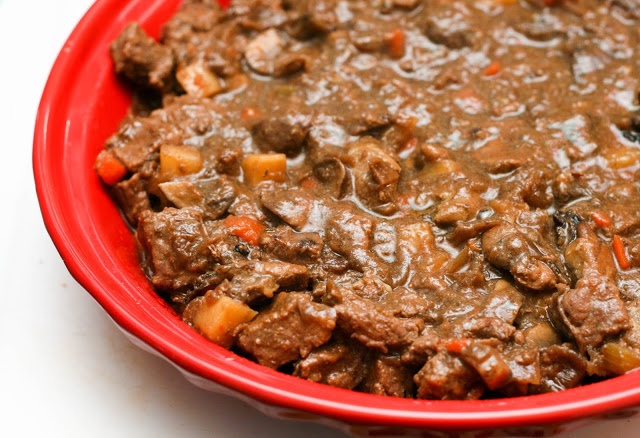 Cover with a sheet of puff pastry. Brush with egg. Vent with the tip of a knife. It is okay if the pastry does not totally cover the top of the pie plate.

Bake 30 minutes or until the pastry is golden brown and the pie is bubbling. Remove from the oven and let sit 5 minutes prior to serving.

*I made another batch of slow cooker caramelized onions for this. Alternately, you can caramelize 2 medium onions in the pan prior to adding the rest of the ingredients.

I had come across a reference to steak and smoked oyster pie in a book I read last year. It was too warm for meat pies then but now that we are in the dead of winter, I thought I’d revisit the idea. I looked at a ton of recipes and they were all a little different. some called for puff pastry, some for jam(?), some for shortcrust pastry, some for dark beer, some for mushrooms,  some for no vegetables at all. The only thing that most could agree on was that the pie was popular in pubs and that the oysters were probably added (either smoked or fresh) to stretch the meat because they were so plentiful.

I finally decided to just come up with my own recipe using my favorite stew and meat pie ingredients with the addition of the smoked oysters. I don’t think I had ever had smoked oysters (I found them near tuna in the supermarket) before but they were quite good! Very savory. I added them at the end of the filling cooking time to make sure they didn’t get tough like regular oysters would have been after an hour plus of cooking.

I loved the result. It had a light smoky flavor from the oysters, was rich and hearty from the caramelized onions, mushrooms, vegetables and meat and the pastry top made it seem festive and special.