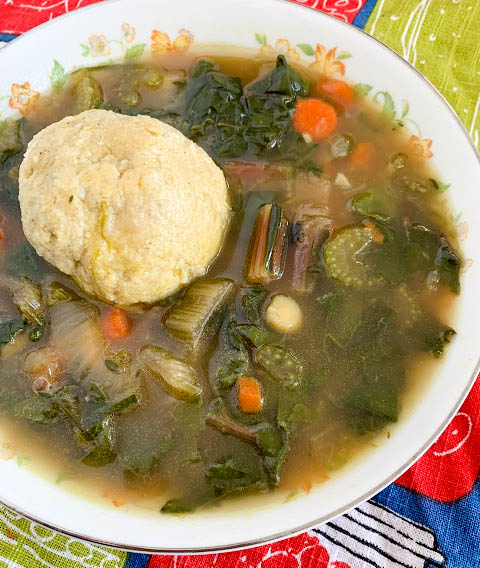 Mix together the dumpling ingredients until smooth in a large bowl. Refrigerate in an airtight container overnight.

*Sold at Middle Eastern grocery stores. Or buy plain chickpea flour and toast it in a dry skillet. Cool before use.

WHEN YOU WANT TO MAKE THE SOUP:

Bring a large pot of salted water to a boil. Form the dumpling mixture into 1 1/2-2 inch balls (about 12-15) drop into the boiling water and cook for 45 minutes or until they are fully cooked (remember they have raw chicken in them!). They will float fairly earlier on but don’t be tricked!

Refrigerated any leftover soup and dumplings separately  (to avoid the dumplings absorbing all of the broth) and re-heat up together in a pot. 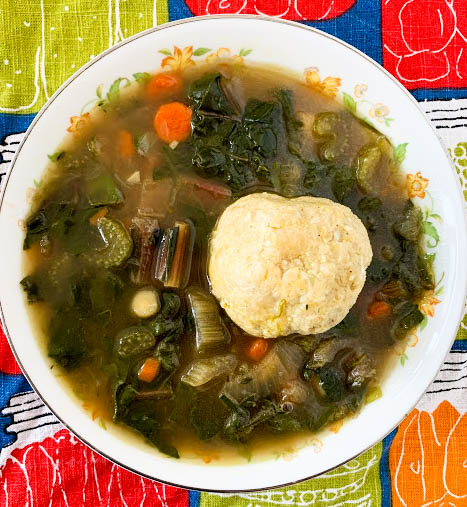 This is one of those dishes where  I came across a mention of once and thought it was unusual but then once I had heard of it, I came across references to it everywhere. It’s an Iranian dish that is apparently popular in the Iranian Jewish community at Passover. Chickpeas are one of those ingredients where there is some debate over whether it is okay to eat at Passover or not. A lot of Ashkenazi Jews don’t eat any legumes during Passover but in 2016, it was ruled that they were fine. It’s all a bit complicated and personal to many people but if this is an issue for you, then you know what you can or want to eat.
Luckily, it is not Passover now! While I think this soup would be great then, I don’t normally want to make some big soup dish when it is potentially warm and sunny out. No thank you! Deepest, darkest winter? Soup’s on!
This soup looks sort of like matzah ball soup (which may explain the popularity at Passover when matzah rules) but these dumplings are made of toasted chickpea flour and ground chicken so the meat in the dumpling, not the soup! I’ve made meaty dumplings before when I made Marak Kubbeh Adom (Beet Soup with Meat-filled Dumplings) but these are so much easier than that was! Here the chicken is basically the glue that holds the dumpling together. I cooked them separately like I do matzah balls, not only with leftovers in mind (when stored in soup dumplings tend to soak up all the broth and fall apart) but because there is raw chicken in there and they need to be fully cooked. I didn’t want to overcook the veggie soup at the expense of the gondi.
Like I do when I make matzah ball soup, I also made the soup more hardy than recipes I found online. I often see matzah ball soup at restaurants where the matzah balls are the star, floating in a sea of plain chicken broth or “soup” that is just a sad piece of chicken and a lone carrot. Gondi is most often served that way too–just broth. If I am going to put all that work into a dumpling, this soup is going to be a meal, not some appetizer! So I made a really tasty vegetable-packed soup to float the gondi with tons of rainbow chard and root vegetables. It was so so good! Very satisfying and full of flavor! The gondi were surprisingly light and I loved the spices.