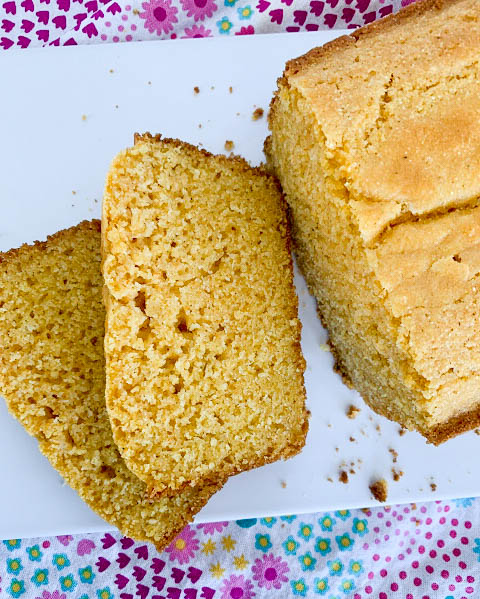 Preheat oven to 350. Butter and flour a standard loaf pan. Set aside.

In a large bowl, whisk together the dry ingredients. Pour the buttermilk and butter over the dry ingredients and stir to combine. Scrape into the prepared pan. Bake 50 minutes or until a toothpick inserted in the center of the pan comes out clean. Cool, in pan, on a wire rack for 5 minutes then invert and continue to cool on wire rack.

I came across a reference to a regional cornbread from the middle of Tennessee that seemed like a mix between northern and southern-style cornbread and had to make it. I can never decide what style of cornbread I like best so something in the middle of the two was very appealing. It’s apparently most often made in a loaf pan which is perfect for me because I like a good surface area to butter! Cornbread baked in an 8×8 inch pan doesn’t give you an easily sliced edge to butter but these slices have plenty. The name seems to come from it being lighter in texture than traditional cornbread–more like that of what used to be called “light bread”, sandwich bread made with wheat and yeast. Some very old recipes call for making this cornbread with yeast but the majority of mentions I found referred to it as a quick bread; one leavened by the combination of buttermilk and baking soda which is much easier to whip up on the spur of the moment.

I used melted butter because I think it adds a nicer flavor than oil or melted shortening (other suggestions I found for making this bread) but I bet bacon grease would also be good if you have that on hand.

The cornbread has a light texture, is slightly sweet but rich in corn flavor and has a pleasingly crunchy crust. Traditionally served with barbecue, it’s also great with soup or chili.