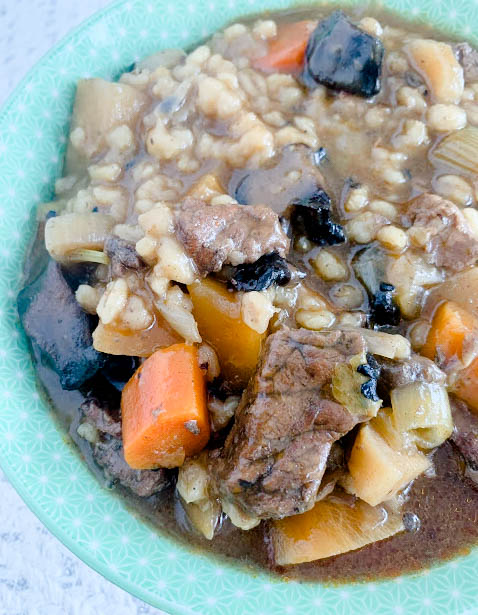 In a large nonstick skillet, sprinkle the beef with flour then brown for 1-2 minutes. Add the mushrooms and saute until the beef is lightly browned on all sides but not fully cooked. Use a slotted spoon to scoop the meat and vegetable mixture into a  4 (it will be very, very full!) or 6-quart slow cooker. Add the spices, barley, and stock. Stir. Cook on low for 8-10 hrs. Add additional warmed stock to thin out the soup if desired.

We made mushroom barley soup back in 2006 which was very good and reminiscent of what my husband used to get at the 2nd Ave Deli in NYC. Then I made a meaty version in 2013 (and served in a mug that broke long ago and that I miss) that was also delicious. I had been thinking about that soup a lot lately while we’ve been home self-isolated due to the coronavirus. We only have grocery shopped twice since 3/12/20 but our produce deliveries have started up again and we can add things to the box if we’d like. They had barley and some lovely local mushrooms so I thought I’d try yet another version.
This one uses rutabaga (aka swede, neep), a true underutilized stalwart of the kitchen. In the US they are often waxed so they last for nearly forever in a cool place. They are a cross between cabbage and turnips and add a peppery flavor and texture interest to the soup. I also used some parsnips I seriously believe I bought in February. Behold the power of the root vegetable!

This soup comes out the slow cooker pretty thick. It reminds me of what Rachael Ray used to call a “stoup” a cross between a stew and a soup. If you like more of a soup texture, add some (warmed) stock or broth to your bowl or the slow cooker (if you have room, I used a 4 quart and it is packed) before serving. That pearl barley really absorbs a lot of liquid and expands quite a bit. I kind of like it less soupy but it’s up to you.

It is just so cozy!