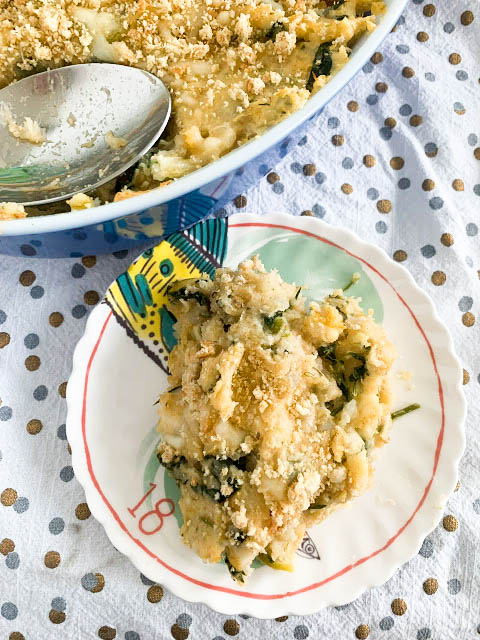 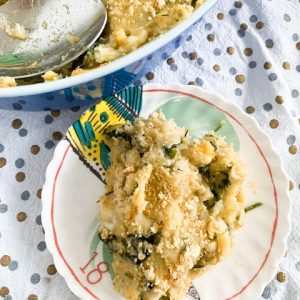 Cod and potato gratin inspired by the Broadway play, Come from Away.
Print Recipe Pin Recipe

If you'd like your bread crumbs extra toasty (I didn't bother myself but it's a good idea), brown them in a dry skillet before adding them to the topping.

About a year ago we went to see Come From Away at the Hippodrome Theatre here in Baltimore. I honestly didn’t know what to expect–a musical about rerouted planes on September 11th??–but was delighted by what we saw. Being who I am, I was very interested in the mentions of food in the play. As soon as the curtain went up, I googled “cod au gratin” a dish they mentioned as being a classic up in Newfoundland. I found a tweet on the official Come From Away twitter account that included a recipe. It was pretty much what I expected (cod, cheese, and breadcrumbs) but I had sort of been expecting it to include potatoes. Possibly because potato and cod are linked in my mind thanks to our own local cod dish, coddies, which are fried potato-salt cod cakes. Or I just like potatoes.

I filed the idea away for a future meal but clearly it took a pandemic and being stuck in the house for 70 days to get me to make it. This May has been freakishly chilly and damp so, despite the late date, it is totally casserole weather. I haven’t been grocery shopping since April so I had some aging potatoes to use up, half a bag of frozen Alaskan wild-caught cod, some shredded gruyere (from Aldi!), breadcrumbs we’ve been making from heels of bread and freezing and some parsley and green onion from this week’s produce delivery. What better day to make my dream cod au gratin?

The finished result is a little easier than the “official” version– I think, no roux, and I think hardier thanks to the addition of the potatoes but I’m sure more flavorful. To keep it from being too bland (honestly, I rarely buy cod because it is bland and unlike the people of Gander, I am not fishing for it myself), I added a healthy dose of paprika, a sprinkle of rosemary, garlic, onions, and spring onions. The parsley and spring onions also added some much-needed color. The result was really good! Gruyere is a fairly assertive cheese (maybe try a sharp cheddar if you don’t have any) which added a lot of flavor but didn’t overpower the cod. It was homey and very comfort food-y, something I think we all need right about now. I’m sad it took me a whole year to make this! It’s worth tracking down fresh (or frozen) cod.