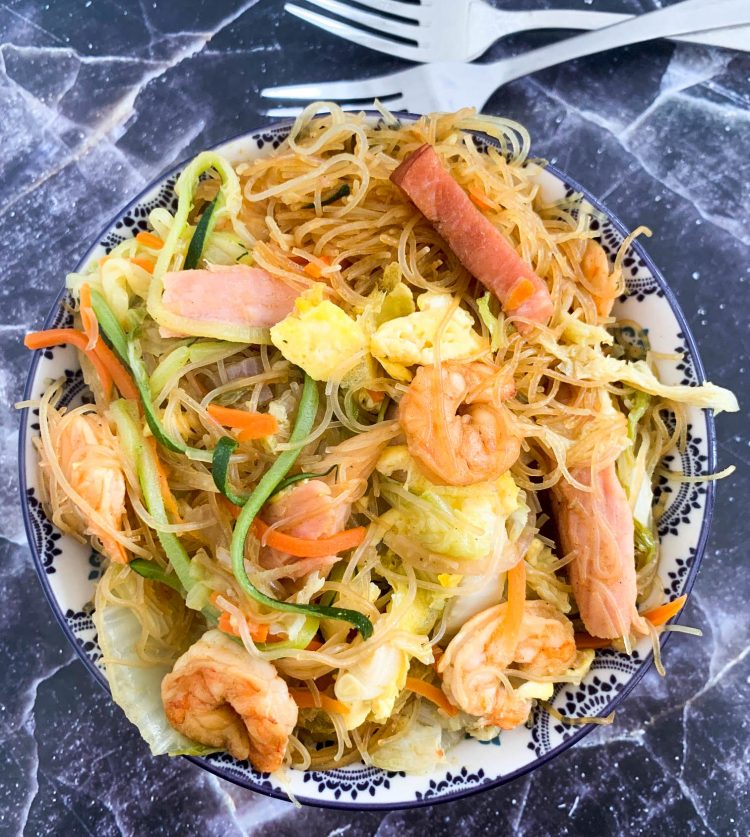 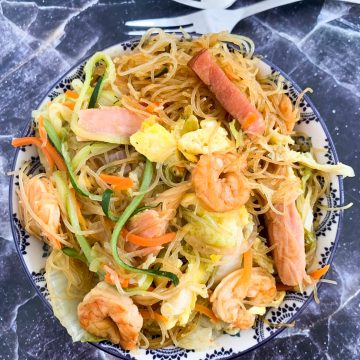 Singapore Noodles with Shrimp and Ham

Some of us have been making all of our own meals since mid-March and take out is starting to seem like a distant memory. “I remember eating food I didn’t have to prepare myself”, I muse, as I stir a pot for the billionth time. Back in the before times, I’d mix it up now and again and get Singapore Noodles when we’d get Chinese takeout. They are normally pretty different than other offerings on the menu thanks to the addition of curry powder and the choice of noodles. Singapore Noodles, perhaps unsurprisingly if you know the origins of a lot of other popular take-out dishes, don’t appear to have any real connection to Singapore. In my not terribly deep research, I couldn’t find a real definitive answer to how they got their name or why they have the ingredients they do. There are lots of guesses surrounding a chef in Hong Kong but it seems like it comes down to these types of rice noodles being popular in Singapore and curry powder being an imported ingredient that was added for a fancy and “exotic” touch which seems tenuous to me.

At any rate, they are pretty popular Chinese takeout fare around here. I will be honest, it was a bit tedious to make these noodles at home but very delicious. One of the great things is that they are very customizable. I’ve had Singapore noodles with all sorts of different meat and seafood in them. A place near me does fake crab, crawfish, shrimp, char siu, chicken, and beef! It’s bananas and only like $8. I’ve had seafood-only versions, ones with beef, chicken, and ham, and vegetarian ones with tofu. It really is a flexible dish– all you really need are vegetables, noodles, curry powder, protein.

Since it’s nearly Christmas and I shop the sales, I had leftovers from a 1 1/2 inch thick boneless “carving ham” from Aldi (really, some of the best ham I’ve ever had)  so I decided to use that and some frozen shrimp. This really is a great holiday leftover recipe if you have the ingredients on hand. It’s quite forgiving and doesn’t share the flavors of the stereotypical Christmas feast, which I know is important to some people. I have seen Singapore noodle recipes that call for peanuts so I don’t feel wrong putting ham in over making char siu. It’s intensely savory and smoky and a real punch of flavor which is what the pork would provide and as I’ve said before, I have actually had it with ham before. I liked it a lot. The smoky flavor of the ham also mimicked the “wok hei” favor that you get from restaurant-made stir-fried dishes which I find difficult to replicate at home on my regular stove and smaller wok.

It does require some timing and a fair number of pans (unless you have a giant wok!) and I actually ended up putting it all in a big mixing bowl at the end vs trying to toss it all together on the stove. I used my julienne peeler for the carrots and zucchini but a spiralizer or a knife and some time would work too. I like using S & B curry powder in this but you can also use another Chinese curry powder or even Madras curry powder. The powder can make the dish seem gritty if you don’t deal with it properly. Some recipes call for “blooming” the powder in oil but I find that makes the final dish overly greasy. Adding it with some liquid directly to the pan with the noodles and meat prior to tossing everything together is the best way to infuse every bite of the noodles with flavor and eliminate any grittiness from the powder. Don’t try to combine the steps to save time, you don’t same much time and the results aren’t quite as good.

The real joy in recreating these recipes at home is simply making the dish to my personal tastes and the thrill of being able to make for myself something that I’ve only had in restaurants or as take out. I love how this turned out but I can’t claim it is better, more authentic, or anything than the original take-out I’ve had dozens of times. However, it is fun to make and eat!