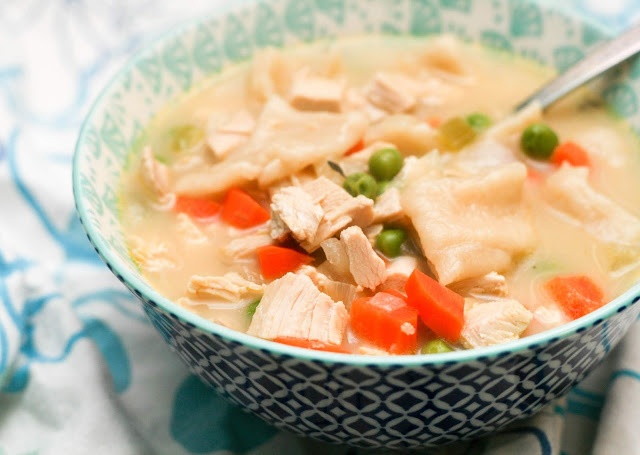 In a large, heavy-bottomed pot, saute the carrots, celery, onion, and garlic until softened. Add the herbs, turkey, stock, peas, and spices and simmer.

In a medium bowl, stir together flour, baking powder and salt with a large spoon, then slowly stream in water until the dough forms into a ball. Knead the dough until the mixture is well combined and elastic dough is formed. Set aside.

Allow the soup to simmer until the vegetables are fully cooked. Bring to a rolling boil.

Roll out dough on a well-floured surface** to a large rectangle about 1/4 inch thick. Cut the dough into 1/4-1/2 inch squares. 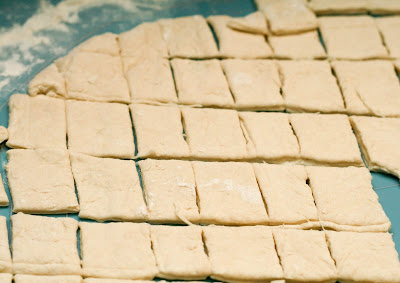 Drop the dumplings in the soup a few at a time and cover. Cook until the dumplings float to the top then reduce heat and stir in milk. Serve.

*I use these herb shears.

**I used this pastry mat. 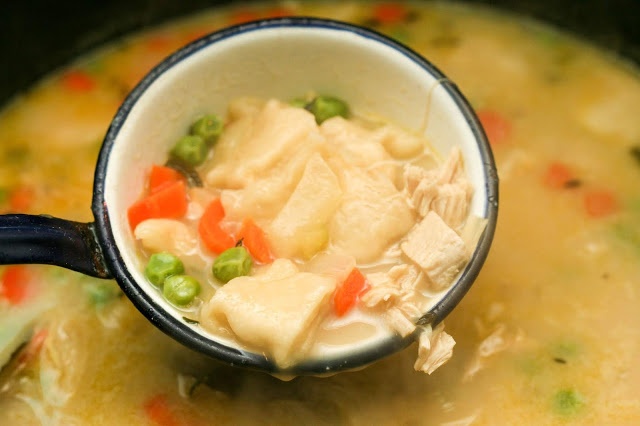 I actually eat a fair amount of canned soup. I spend a lot of time cooking and baking but sometimes I don’t get to eat it right away for whatever reason–I have to photograph it, it is cooking while it is lunchtime, it’s for dinner, it’s a dessert etc. My husband takes his lunch to work most days and has limited inexpensive options near his job so if we have just enough leftovers for one he normally takes them since I am home and can always make something.

Anyway, canned soup is pretty cheap and easy so when I’m busy, it’s easy to just heat up a doctored can vs making something that requires more effort. One soup I’ve tried is a creamy chicken and dumplings and it was pretty good! It stood out to me because the dumplings were quite small and flat-ish, not the giant puffy dumplings I’m used to in matzo ball soup or in other dumpling soups (I made a spicy Southwestern-inspired soup with big dumplings nearly 10 years ago).

I sort of thought it was just because it’s in a can and big dumplings would be silly and not work but in my research, it looks like they are possibly a regional variation or a way of making dumplings that has fallen out of popularity. I’ve seen a few recipes that refer to chicken soups like this as “old fashioned chicken soup”, “old time chicken soup with mini dumplings”, “Granny’s chicken dumpling soup”, etc with a lot of discussion about their elderly relatives making chicken soup that way. Anyone have any idea? They aren’t just small, homemade noodles (so “Amish chicken noodle soup” isn’t quite the same thing) they are definitely puffy dumplings in texture.

I had the idea to make a homemade version of this soup in the back of my mind for a while now. I honestly don’t love chicken so I put it off. This time of year you can get turkey breasts really cheaply so I roasted one for dinner the other night and had a ton leftover. It seemed perfect for this soup because one of the more time-consuming things about making chicken or turkey soup is poaching the chicken or turkey parts to then cool and shred and since this recipe requires one to make roughly 100 dumplings, it is great to use already roasted meat that just needs to be heated through. I actually only had about 20 minutes of hands-on time for this and it only cooked for about 30 minutes so it really was basically a 30-40-minute meal since I was making the dumplings while the soup simmered. Not bad for a weeknight!