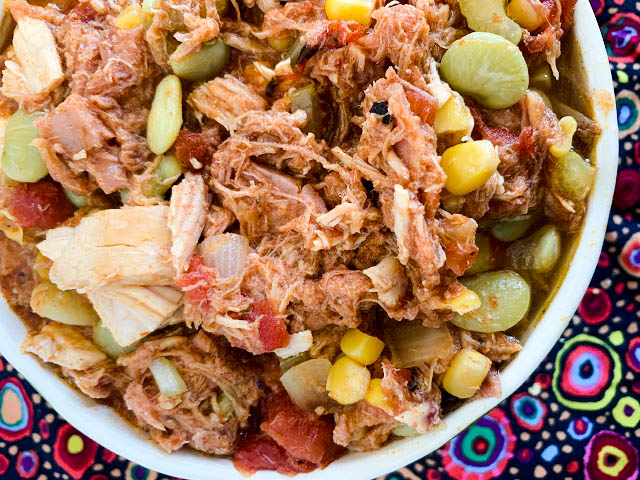 Place all ingredients in a 4-quart slow cooker. Stir. It will be very thick. Cook on low 8-10 hours.

There are so many ways to make Brunswick Stew and everyone thinks theirs is the correct version. I do not make this claim! If people can’t even agree if the stew originated in Georgia or Virginia or when who am I to decide what was in it? Some sources claim that the original stew used more “rustic” meats like a squirrel, but I don’t know if it is true or not. In the south, I’ve mostly seen it served as a side dish at barbecue restaurants where it is often made of what appears to be leftovers of what’s on their menu: beef, pulled pork, chicken or even turkey, and some vegetables. To me, the origin that makes the most sense is similar to that one: you have a lot of leftover meat and you need to use it up. Why not a stew?

Vegetables are always in the final stew but vary a bit between recipes. Lima beans, tomato, corn, and celery seem to be the most common. Potato is used in some versions as is okra. I actually wanted to put okra in mine but I ran out of room in my 4-quart slow cooker. If you scaled the recipe up or made it in a larger slow cooker (like a 6-quart), I’d add okra.

The meat is also up for debate. Depending on the region and cook, I’ve seen combinations of chicken and pork, chicken and beef and all pork. Most seem to agree that a combination of at least two different meats is best (or to cook it in fatback and add chicken). The quantities are often massive, serving 40 or more! To make it at home, I wanted it to be easier and not require stirring a pot with a paddle in the town square for hours. The slow cooker seemed ideal. To simplify it further and make it even more of a weeknight meal, I used leftover rotisserie chicken (breast and thighs–leftovers from this would be good too) and leftover pulled pork I had frozen. I wanted to up the smoky flavor to get it closer to the versions I’ve had at barbecue places so I used fire-roasted tomatoes and chopped up some country to give it a super-rich, umami boost.

Some recipes add bottled barbecue sauce or even (yuck) ketchup but I don’t think it needs it if you are using leftover pulled pork. I tossed in some chili sauce, spiced and apple cider vinegar to kick the flavor up a bit.

They say the stew isn’t ready until you can stick a spoon in the middle of it and have it stay vertical. This is definitely true of this Brunswick stew! It is hearty, hardy stuff.

While I’ve mostly seen Brunswick stew at restaurants served as a side dish, something this tasty and filling deserves to be center place at the dinner table. I served it with cornbread I made with a bit of country ham in it to tie it all together.