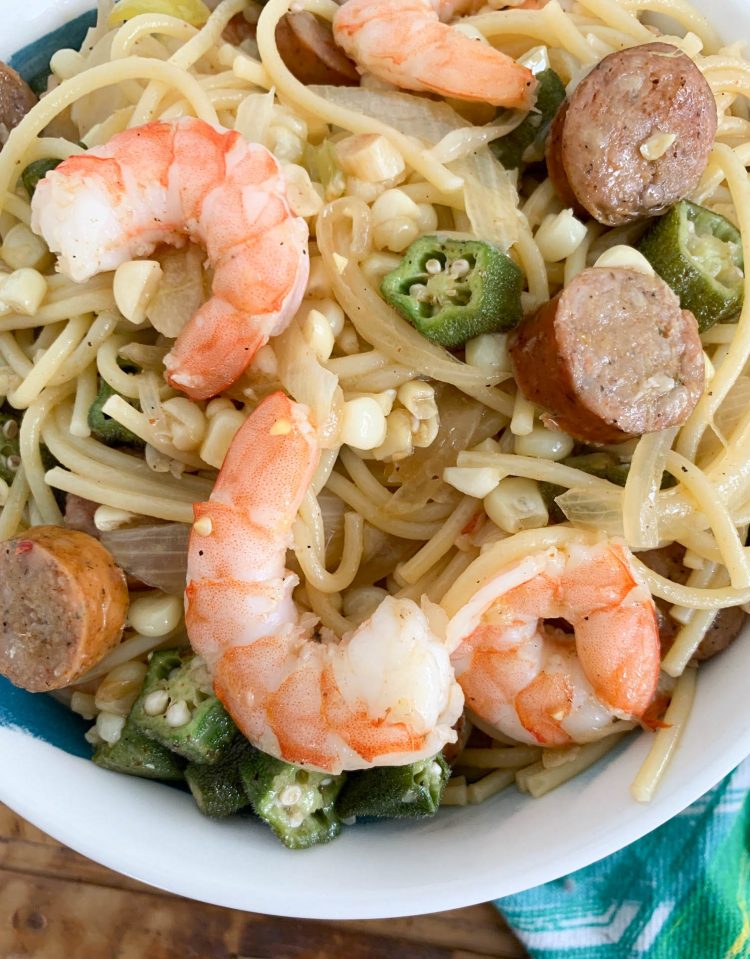 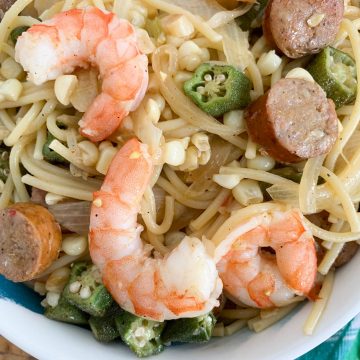 The leftovers reheated surprisingly well in a skillet the next day.
Keyword pasta

It’s been a rough month or so. My mom ended up going into hospice and then died two weeks ago after a real roller coaster of hospital/rehab stays. I’m glad she was able to go back to her home with my dad and her dog to live out her last few days. It’s been emotionally draining handling all of her medical decisions and now I am handling her estate and my parents’ household so I’ve been busy and exhausted. We haven’t resorted to take out (you can see what we’ve been eating each day here) which is a small miracle in itself so there has been a lot of cooking going on but nothing too exciting.

I finally felt like cooking and made this really tasty pasta dish using probably the last of the corn on the cob and okra of the season I drove out to Kingsville to buy at my favorite farm stand. It’s sort of inspired by a shrimp boil or even gumbo. Normally I wouldn’t think of pairing these with spaghetti but why not. My mom’s dead and we are still in a pandemic. I can make a non-Italian-related hot pasta dish. We are living on the edge here.

We had bought some chicken andouille at Costco (where it is now branded as “keto” but appears to be the same chicken andouille they’ve had for years) and I knew once I opened it up, we’d have to eat the rest of it in a couple of days. Matt’s been wanting to make jambalaya so I got to the sausage first and made this. Now he can use the “leftovers”. It ended up being really good. So I thought I’d take a picture and share the recipe with you. Corn should still be available right now but I bet frozen would work too. I think September corn is possibly the sweetest so snag some while it is still technically summer and make this. It’s fresh-tasting, surprisingly light (thanks, chicken sausage) and you can make it as spicy as you’d like with that Creole seasoning.