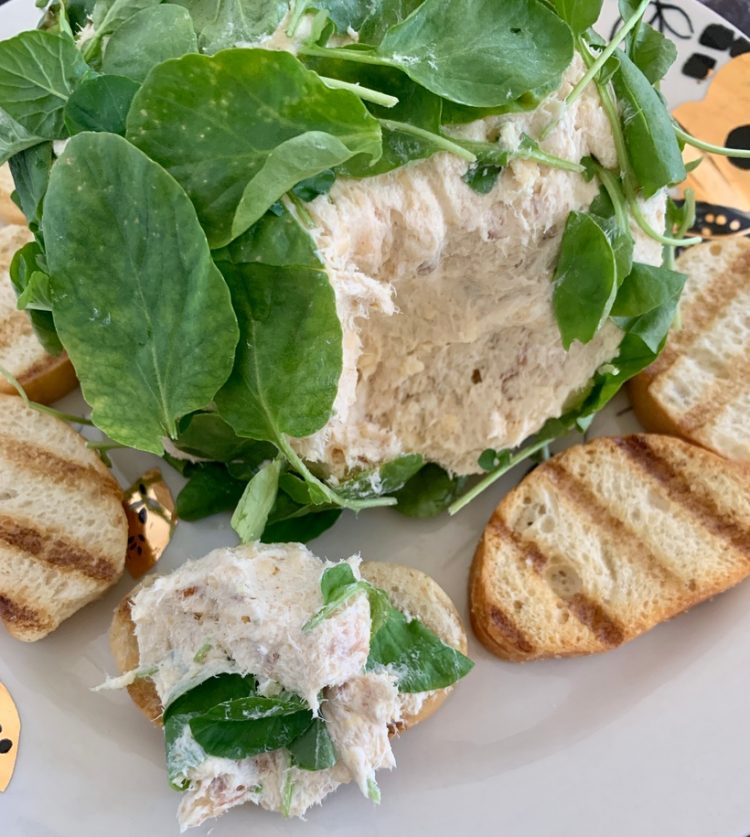 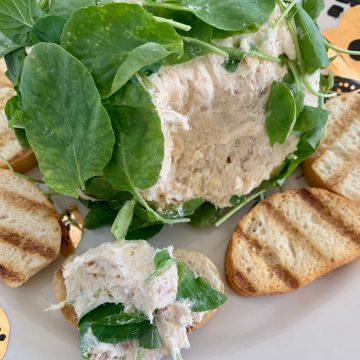 Serving suggestions—toast points, crostini, crackers, crudités, You can also skip rolling it into a ball and use it as a spread. Refrigerate leftovers up to 3 days.
Keyword snacks

This originally appeared a year ago on my tinned fish Patreon.

Switching away from tinned fish today in favor of another way to find preserved seafood—in vacuum-sealed plastic packages. I bought this trout at Trader Joe’s but any well-stocked supermarket or specialty food store should have it. It doesn’t have quite the extravagantly long expiration date of tinned fish but it is normally at least a month away from the date of purchase or longer.

I love smoked trout because it is a meaty fish that delivers a robust smoky fishy flavor that can really hold its own against bold flavors like the horseradish I used here. It is also a less oily fish than salmon or sable (which is used to make whitefish salad) which I think makes it a better choice in a cheeseball like this one or for a “lighter” smoked fish salad.

The holidays are coming so I thought it would be fun to share an easy, holiday-worthy way to serve preserved fish. I went with stronger flavors that wouldn’t get lost in the cream cheese but that also wouldn’t overpower the trout. Horseradish and mustard powder are perfect for this, they have an earthy heat that cuts through creaminess but can also be tempered by it. The final cheese ball is surprisingly mellow but well-flavored.

Traditionally cheeseballs are rolled in nuts and while I like that, I feel like it makes them a little heavy. For a more delicately textured cheeseball like this one, I like to use minced herbs or in this case, peppery watercress. Watercress has been in all my local supermarkets the last few years and it’s been a real boon to my cooking. It is great raw or cooked and has a sharp flavor that I love. I just popped off the largest of the stems and left them whole but you could coarsely chop them, just take care that the cheeseball is fully covered or it will stick to everything.

I will be honest and say we ate this for lunch on more than one day. It is totally acceptable to do this and it is acceptable (encouraged, even!) to make a cheeseball for a very small Covid-19 compliant social gathering. It keeps just fine in the fridge and if I was you, I’d save some just to have on a bagel the next day. 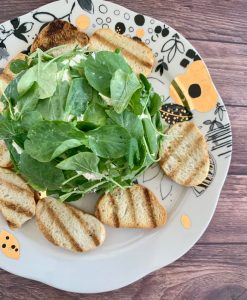