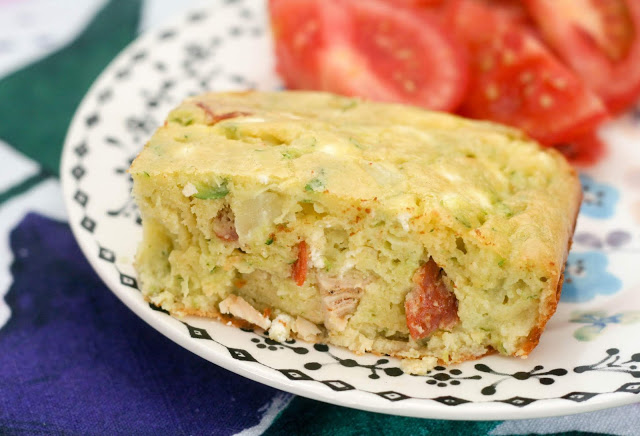 Note: this part can be made ahead of time and refrigerated.

Squeeze dry zucchini if needed. Saute the onion and zucchini in a skillet using a small amount of olive oil until the onion is translucent and any water has evaporated. Remove from heat and allow to cool to room temperature.  (I actually did this step, cooled it and added the cut up meat and cheese to the container earlier then did the batter-making, adding the meat/veggie mixture part at dinnertime)

Preheat oven to 350. Spray with cooking spray or grease an 8×8 inch pan.  Set aside.

In a large bowl, mix together the eggs, oil, flour and baking powder until pancake-like batter forms. Fold in the zucchini, onion, turkey, chorizo, cheese, and spices.

Pour into prepared pan. Bake 45 minutes or until fully cooked (just few dry crumbs when a toothpick is inserted in the center) and golden brown on the bottom. Allow to sit in the pan for 10 minutes on a wire rack before slicing and serving. 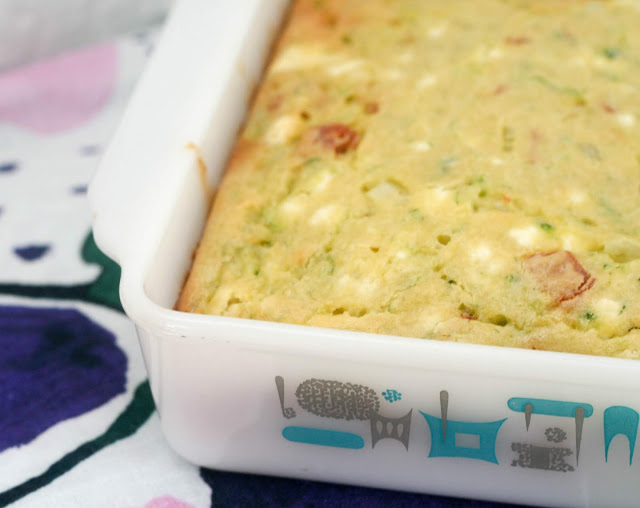 This recipe is great for using up leftovers (I just used leftover marinated boneless, skinless turkey breast but rotisserie chicken would work too), summer vegetables (I have a ton of Vidalia onions and zucchini right now) and some chorizo for oompf in a reasonably quick way. I bought the chorizo when I was trying out Amazon Fresh awhile back but any store or deli that sells fancy Spanish or Italian meats should have it. Capicola would also make a good choice.

It’s sort of based on the old school Betty Crocker/Bisquick “Impossible Pie” where you mix a bunch of ingredients (ground beef and some spice packet generally) and Bisquick to make an “impossible” pie where it magically forms a crust and topping. It’s also similar to zucchini slice which I came across when reading an Australian book which is a sliced zucchini pie/bread type thing*.

Anyway, after adding turkey and chorizo it is basically a whole sandwich in square form. It’s just as simple as a baked frittata but a little more substantial and different. I think it would be great as a brunch dish or a light lunch or dinner. We had it for dinner (I prepped some during the day to speed up dinner making) with just some veggies/fruit for a side as it is practically a whole meal unto itself.

The texture of this dish is surprising and very, very good. It is light and fluffy like a souffle yet still moist and tender.