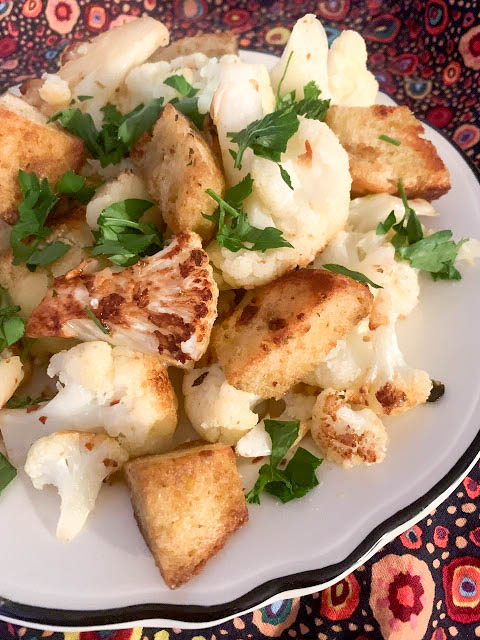 Add more oil if needed, red pepper flakes, black pepper, and cauliflower to the same pan. Saute the pan until starting to brown. Cover and cook until nearly fork-tender, then remove the lid and continue to cook until lightly browned. Add the croutons back into the pan, sprinkle with parsley and stir. Serve immediately.

I admit this is a bit of an odd recipe. I had a whole loaf of “country French” bread I bought at Costco last week. I used the first loaf for sandwiches but the second loaf just sat on the counter going stale. I’ve been trying really hard to reduce food waste so I was trying to think of something to use up this bread which was rapidly bearing resemblance to a doorstopper. Bread crumbs seemed obvious but I really didn’t need any.
I also had two heads of cauliflower taking up a lot of room in my refrigerator–they were on super sale last week so I impulse bought two. I googled “bread and cauliflower” (ha!) and mostly came up with recipes that called for breadcrumbs or some sort of “lower carb” stuffing where you sub cauliflower for some of the bread. That seemed a little sad. Then I was thinking about how some Italian recipes like panzanella take stale bread and turn into new dishes without pulverizing it into crumbs. Why not do that with cauliflower?
Since cauliflower isn’t as juicy as tomatoes are, I heavily seasoned the bread cubes. I made big cubes (about the size of cauliflower florets) so the middles of the bread softened up a bit and there were large surface areas to brown vs tiny cubes that can go from crispy and delicious to burnt and greasy very quickly. I love anchovies and capers so it was clear they needed to be included. I even finished up a jar of anchovies I’ve had forever so it was satisfying to use that up too. Adding so much savory flavor to the croutons meant I could simply prepare the cauliflower and still have a fantastic dish. The parsley had been languishing in my fridge for a week too so I really checked off all “eliminate food waste” boxes and it added a pop of color and freshness.
Trust me, you want to make this! It sounds a little nutty but it so so good! Salty, savory and very satisfying. My husband was amazed I came up with this and that it was so delicious. I can’t wait to over buy bread and have to use it up again.