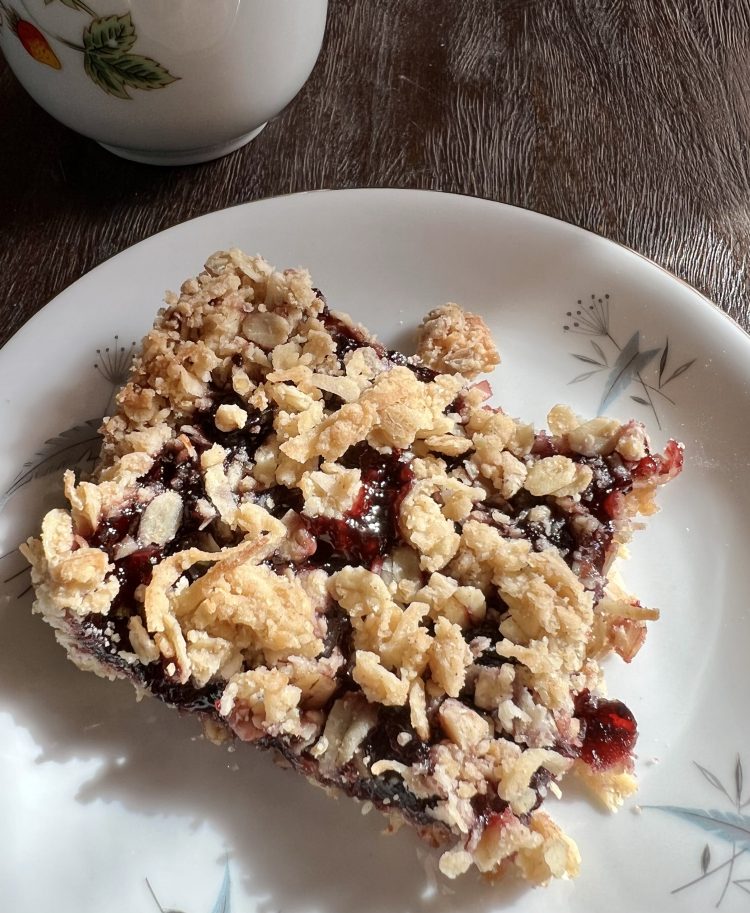 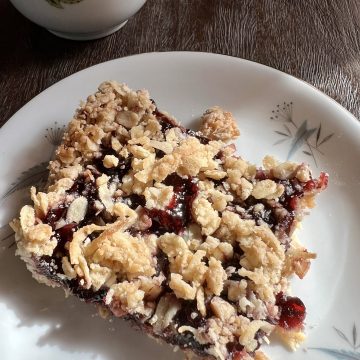 I feel like these jam squares are a little out of season but they were so good I figured I’d post them. Maybe the spices are a little autumnal and it uses jam instead of fresh fruit. Maybe some of us live where berries aren’t really in season yet and have a couple of jars of preserves that they bought for another project that they needed to use up before they expired. You never know.

I’ve been wanting to make jam bars forever and I finally did. I didn’t really want to make all oat one because one of my goals this summer is to make crumble (now I have the Lorraine Bowen crumble song stuck in my head which apparently has had a second life since my husband first played it for me in 2004 off a CD collection of underground British artists) so I had the idea to add coconut to mix. It was a good idea! I think coconut adds so much flavor and texture interested into things like oat squares that let’s face it can be kind of bland. I made them so they are very quick to mix together–stirring, reserving, spreading, and crumbling only! I don’t think they need more fuss. I’ve seen a lot of recipes that are more like shortbread on the bottom or have you do something different for the crumble topping than you did for that base and I ask you, why? Why do that to yourself? This is more than enough. Lots of oats and coconut and because no one likes bland, a lot of vanilla and spices. I also didn’t use even half the amount of butter some of the recipes I saw called for. I want this to be something that isn’t greasy and can reasonably be eaten as a snack or breakfast if you are feeling cheeky. Not everything has to be a cookie.

I will say if your jam or preserves are very runny, you might want to use slightly less so they don’t get soggy and stay easy to cut. The one corner I really slapped some on was tricky to cut into one big square because there was just so much jam. But that was okay! We just now have two.

They also freeze and defrost well. I suggest freezing them on day one after they have fully cooled for best results.