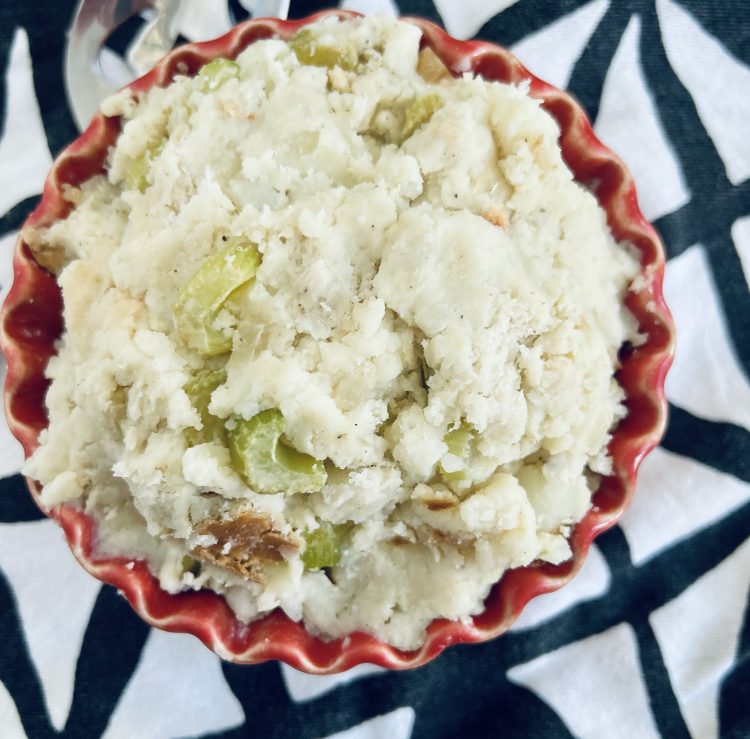 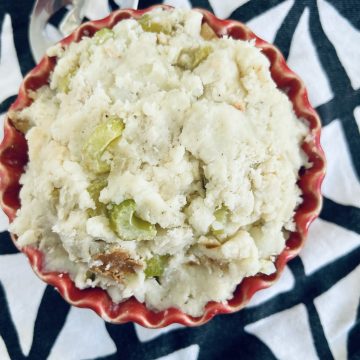 You got stuffing in my potatoes, you got potatoes in my stuffing!
Print Recipe Pin Recipe
Prep Time 15 mins
Cook Time 15 mins
Course Side Dish
Cuisine American

The bread should be fresh but you could easily make this with warmed, leftover mashed potatoes. Or honestly, by mixing leftover stuffing and potatoes together.
Keyword side dish

I’m not sure about the origins of this one. I have seen it referred to as “Maine potato stuffing” but I sort of feel like they are referring to Maine grown potatoes rather than the dish being popular in Maine? I had no idea that Maine was such a hot spot for growing potatoes but apparently there is a rich history.

I did come across references to potato stuffing made with sourdough or “dense white bread” in various New England and Canadian websites and publications but the sourdough still throws me a little off. I guess anywhere can have sourdough?! Where are the origins? Most the recipes call specifically for Bell’s Seasoning which is a New England staple which is a bit of a clue.It’s not a “total guess”, it’s the characters finally coming together and piecing together what happened to them. Until fairly late in the book they were very divided. Once they came together, they figured out what happened.

It’s similar to the Pennsylvania Dutch potato filling I made in 2012 that is oddly one of my most popular recipes ever. Much like the potato filling which is also sometimes called stuffing it is not as what I would think of as stuffing. It’s more like thickened and seasoned mashed potatoes. Which, honestly is amazing. It tastes like when you have a big Thanksgiving plate of food and some of your mashed potatoes gets on your stuffing. It is not the cutest dish but it was really good! We had some leftovers with leftover ground  beef gravy over it and 10/10 highly recommend.

One caveat— it does cool off very quickly, probably because you are mixing hot potatoes in a huge amount of room temperature bread, so plan accordingly. Don’t skip the heating the milk and butter, you don’t want to cool the mixture down even faster.