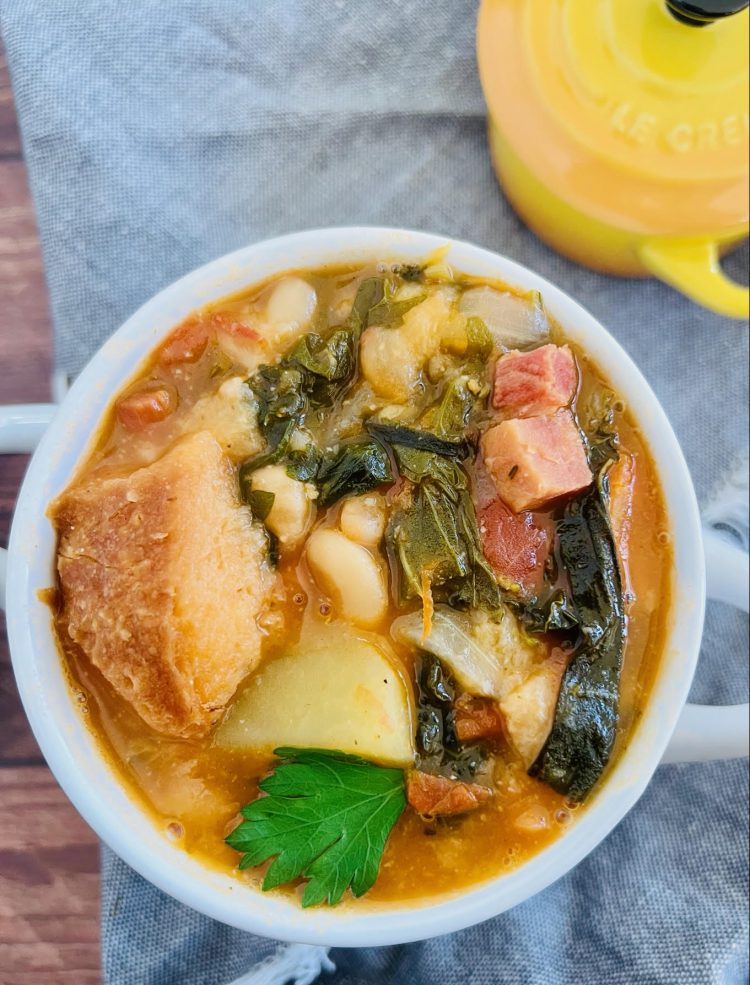 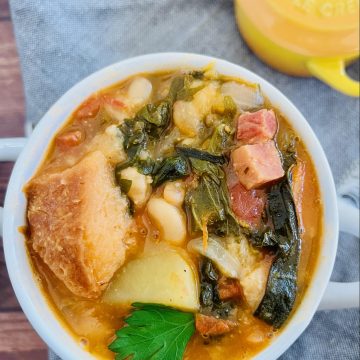 I used basically a whole loaf of the "Country Loaf" bread from Costco with the crusts cut off.
Keyword kale, soup, weeknight meals

I had a loaf of bread we didn’t get to and I thought this would be the chance I needed to make ribollita, the Italian soup that uses bread as a thickener. Ribollita apparently means “reboiled” and refers to the fact that apparently thrifty Italians would re-boil the soup they made the day before and add the bread they most likely had with the soup to make a new dish. Apparently, people also re-reboiled the bready soup and made some doughy disk to eat? I’m impressed with the repurposing and the thriftiness but that’s a little far for me. Thankfully this soup reheated just fine a couple of days later.

I found a bunch of recipes and thought once again how much I hate following a recipe. So many unnecessary steps and I wanted to use what I like, not what I’m told to use. I started from scratch and ended up with this magnificent soup! I had figured out the trick of cooking the canned tomatoes before adding anything else when I made my tomato soup with buttermilk cheddar dumplings and did that again here. It’s amazing the depth of flavor that adds. Normally I’m all for streamlining but it is very much worth the extra few minutes! Since I wasn’t fussing with be being some super authentic thing, I used the beans I had, the greens I wanted, and added potato because I like it in minestrone and thought it might be good. It was good. This is very good soup.

I had an idea to do an ugly delicious soup week here on the blog and have a couple of recipes saved and thought a soup thickened with bread would be an obvious addition but to my shock, it turned out quite cute! My favorite dark Italian rapini and his buddy lacinato kale* gave it a nice color and the tiny bit of crust I left on one cube of bread was surprisingly photogenic. It really is one of the more flavorful soups I’ve made. I was skeptical of the bread but it wasn’t slimy or gross, it just sort of thickened the soup and absorbed all of the other flavors. A real winner!

*Funny story, we were in Lancaster last week at the market and I was sitting outside while my husband went back to get this romanesco and he texted me to see if I wanted any kale. I guess he told the worker that and she said “she is going to want this!” and I did. It was beautiful kale!